The Algarve, with its shimmering ocean beaches, exquisite countryside and golden treasury of superlative golf courses playable whatever the season thanks to the year-round sunshine climate, is one of Europe’s best-loved holiday destinations.

Less than 3 hours flying time from most European airports, the Algarve is also the location of first choice for an increasing number of home seekers, and regularly tops the list for those seeking a sound property investment. 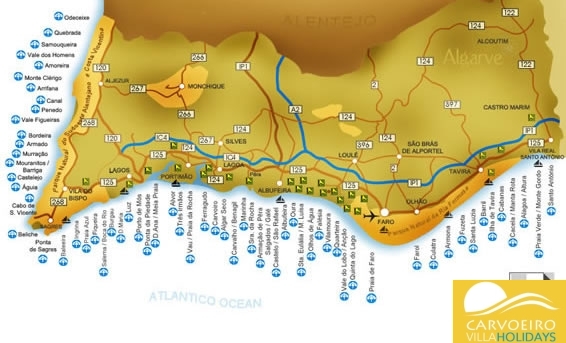 The Algarve is divided into 3 regions ...

... the “Sotavento”, being the “leeward,” eastern side extending from Vila Real de Santo António to Faro;

... the “Barlavento”, or “windward”, western side stretching from Faro to Cabo de São Vicente;

... the “Barrocal”, the lowland area between the coast and the mountain ranges of Monchique and Caldeirão.

The Algarve is well provided with main roads and railways, and the international airport at Faro served by several major airlines is usually never more than a 90-minute drive away. Lisbon is only a 2 hour drive away using the newly completed motorway, bringing day visits or short breaks to the capital within easy reach.

Considered by many to have one of the healthiest and most agreeable climates in the world.

The Algarve enjoys long, dry summers with an average of 12 hours of sunshine per day, it being remarkable to see any rain at all between early-June and mid-September. In recent years, summer temperatures have averaged 28-30ºC, nevertheless, even with highs sometimes in the 40ºs, thanks to the freshening influence of the Atlantic breezes, summer days are rarely stifling and uncomfortable. Winters are mild and often equate to a typical Northern European spring with temperatures averaging about 16ºC and with around 6 hours of sunshine per day. The region’s rainfall occurs mainly between the months of October and March and there is a pleasing degree of variation between the four seasons of the year.

According to ancient Greek sources, the original inhabitants of the Algarve were a tribe known as the Cunete.

Sometime around 1300 BC, the Cunetes received their fist visits from the Phoenicians a maritime people coming from the eastern Mediterranean who probably founded trading posts on the coast at Tavira, Faro, Portimão, Silves and Lagos. Perhaps the most enduring legacy of the Phoenicians is seen in the elaborate shape of the traditional Portuguese fishing boat with its almost Greek looking prow and the mystical eye motif so often seen painted on the bow, said to protect mariners from the perils of the seas. 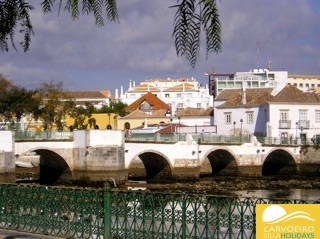 When the Romans occupied the province, they improved and fortified the coastal settlements and built roads crossing the region. In about 450 AD the Visigoths, an amalgamation of Germanic tribes, wrested the control of the Iberian Peninsula (and about half of France) from the Romans and ruled until they were in turn defeated by the Muslims who invaded the Peninsula in 711 and remained in the Algarve for the next 500 years and more.

The Algarve enchanted the Muslims from their very earliest arrival. Their chroniclers and geographers describe it in handsome terms, Ibn Saíd (13th century) had the following to say: …it is a country abundant in fruits and produce of every kind with many cities and towns…its houses, always whitewashed, inside and out, being a delight to behold set adjacent to green trees…looking like unmatched pearls set in a bed of emeralds.. Indeed the houses of the Algarve still reflect the Moorish influence with their rectangular shape, whitewashed walls and flat roof terraces. 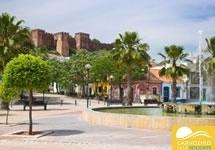 From about the beginning of the 11th century, the Christians states in the north of the Peninsula started in earnest on the campaign to push the Muslims back into North Africa. The re-conquista (as it came to be known) soon gained the sanction of the Pope and became a true holy war; indeed, a Crusade in the true sense of the word. Despite King D. Sancho I of Portugal managing to conquer Silves in 1189 with the help of a fleet of passing Crusaders (on their way to Palestine and the Third Crusade) the Muslims re-took the city soon after in 1191 and it was not until 1248 that Silves was taken definitively for Christendom and 1250 before the last Muslim stronghold, Aljezur, was conquered in the Algarve thus ending Muslim rule in territory today Portuguese.

The 15th century saw the great age of Portuguese maritime discovery, which was born in the Algarve at Sagres, the south-western extremity of Europe, under the guiding hand of Infante Dom Henriques (Prince Henry the Navigator). His famous caravels were built in shipyards founded by him in Lagos and, soon, Portugal was leading the way in the exploration of Africa and Asia.